All the things I would love to buy if I had bottomless wallet and wardrobe.

Hello Louboutins, it’s been a while. Despite most fashion wish lists consisting of these red soled killer heels, My Fashion Wish List hasn’t had a post devoted to them for a while. And now is the most appropriate time – since Louboutin just started it’s 20th anniversary celebration and released not just seasonal collection, but special anniversary collection consisting of some of the best selling Louboutins ever.

But first let’s start with my favourites from Spring Summer 2012 collection. It was hard to limit myself to 6 (I usually go for 6 since it looks good in a post) so I allowed myself a cheeky 7th pick. 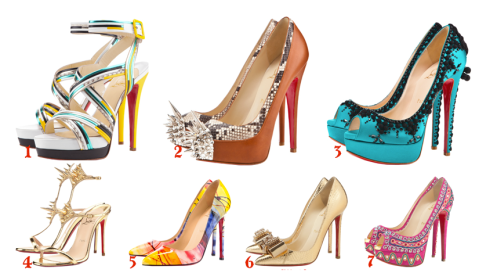 And now let’s move the special treat – 20th anniversary collection which is brimmed with His Shoe Majesty’s (Christian Louboutin) top picks from over the years.