All the things I would love to buy if I had bottomless wallet and wardrobe.

THE Shoes by Kanye West

To tell you the truth so far I haven’t been particularly excited by designs showcased by Kanye West. Apart from one specific item – a pair of shoes. THE KANYE WEST SHOES. They were first presented to the world as a part of Spring Summer 2012 collection during Paris Fashion Week. So why am I mentioning it now, such a long time since you might wonder? That is because I recently found where to purchase them from – LouisaViaRoma.com. And the fact that I discovered them does not mean I am the first in line to buy them, especially at £4145, but then who knows maybe one of you are! (And if so I am not judging you in any way, if I had that much to spare, I would not hesitate a second!) 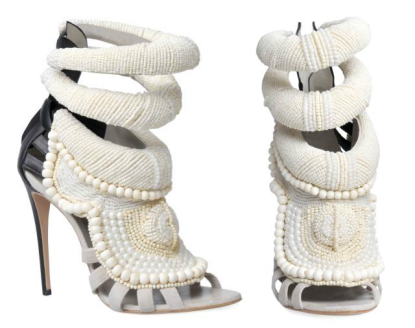 Statement heels inspired by tribal jewellery and covered in pearly beads make your legs look significantly thinner thanks to thick ankle rings, and who would not want that visual effect? But Kanye is not the only one to thank for these beauties as they were created in collaboration with Giuseppe Zanotti, a brand known for their beautiful heels of highest quality – yet another reason to love them! And as much as I love them, I am by far not the only fan! Anna Della Russo wore these heels to Alexander McQueen show straight after they appeared on the runway, Chanel Iman sported them while attending Givenchy show accompanying their creator the day after and recently Kim Kardashian was seen in them, of course who would not wear your boyfriend’s designs!

§ One Response to THE Shoes by Kanye West

You are currently reading THE Shoes by Kanye West at MY FASHION WISH LIST.